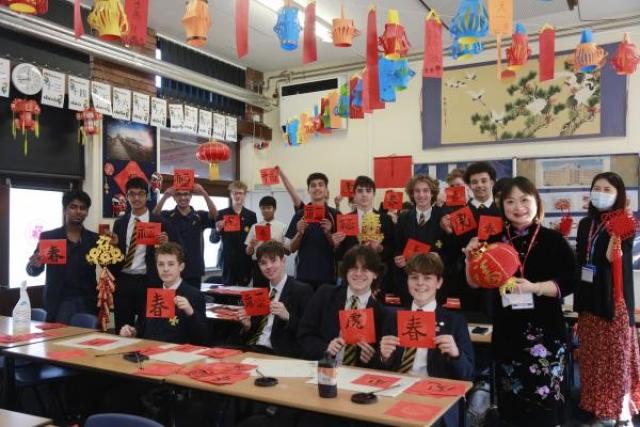 ​On the occasion of the Chinese New Year of the Tiger in 2022, against all odds through the trouble brought about by the pandemic, Confucius Institute at Coventry University planned and organized nearly 20 activities to promote Chinese culture in local communities. The activities were well received by teachers and students from primary and secondary schools in Birmingham, Stratford-upon-Avon, and etc., teachers and students of Coventry University, local people in Coventry and the Chinese community. Mr. John McNicholas, Mayor of Coventry City, expressed that he would strongly support the CUCI and continue to promote the construction and development of the Chinese community in Coventry. 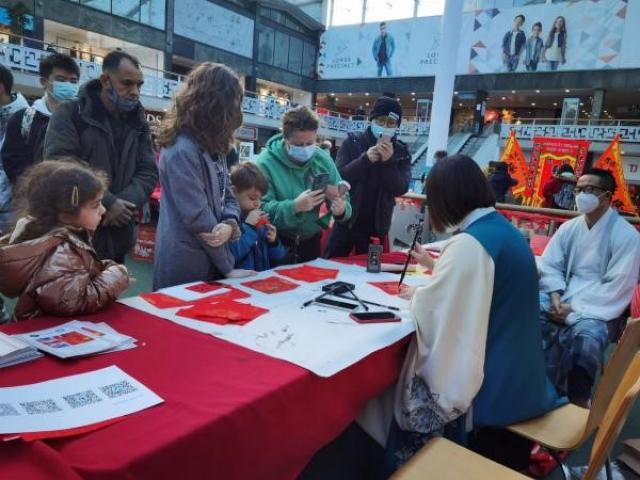 Chinese New Year is the most important festival for Chinese people around the world, and it is also the festival with the most oriental cultural appeal. As Mr. Ji Xianlin said, Chinese New Year is like a light smoke, or a clear blue sky above the distant mountains. We can't hold it, and we can't see it, but when it comes, it only flicks in our hearts. And that is when we know it’s coming.” The pandemic has lasted for two years around the globe, and the UK has also experienced five waves of pandemic peaks and four rounds of lockdowns. Retrieving the perception of the charm of oriental culture has therefore become the first challenge faced by the faculty and staff of the CUCI. After several rounds of discussion, the general idea of the series of activities for the Year of the Tiger has been made: to reach the local communities by supporting their cultural activities of the Spring Festival, so that citizens can enjoy and integrate into it. The most popular shopping malls and the community organizations with the closest connection with the public have become the first choice for the CUCI to hold the activities. 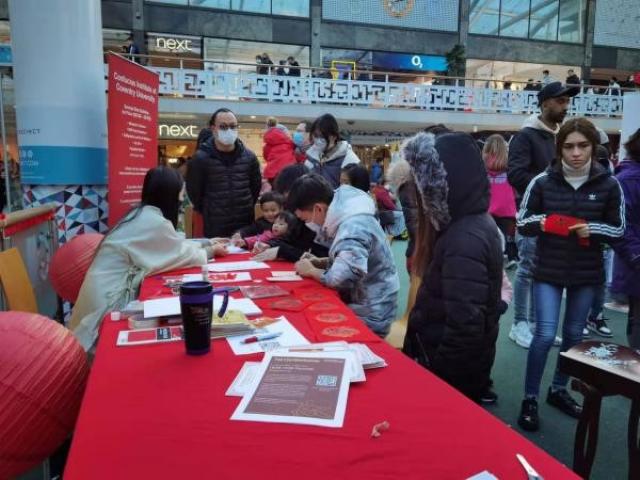 On January 29, 2022, at the invitation of the Lower Precint shopping mall in Coventry, the CUCI held activities themed “Tiger Arrival, Blessing Arrival, Chinese New Year Arrival” in the largest sunken square in the center of Coventry City. The activities included calligraphy, guzheng (a traditional Chinese musical instrument), paper-cutting and other activities rich in Chinese characteristics, offering nearly 5 hours of lively immersive experience in Chinese culture. The guzheng folk music played by the teachers of the Confucius Institute aroused everyone's curiosity about this Chinese national musical instrument. Citizens lined up in front of the calligraphy table, just to receive the blessing characters and small Spring Festival couplets written by the teachers of the Confucius Institute on the spot. Paper-cutouts with elements of the Year of the Tiger not only attracted the attention of children, but many young people were also eager to try it out. They followed the teachers of the Confucius Institute and tried to cut a cute little tiger to bring home.  People gathered to hang lanterns, paste Spring Festival couplets, and apply the Chinese knot. The strong sensation of the New Year was in the air. 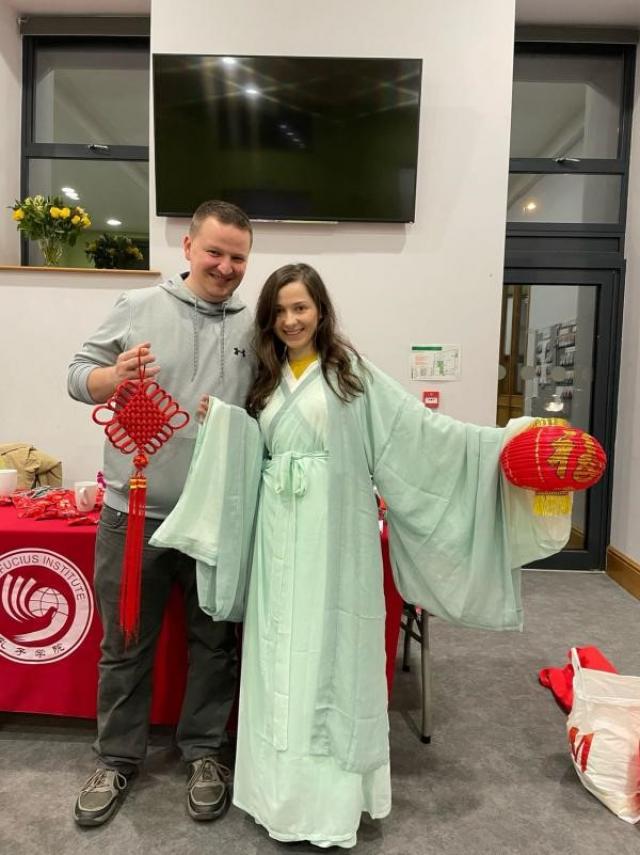 Catherine Ayre, Head of Hillfields Campus of Coventry University, has repeatedly expressed her wish to support the community to hold Chinese New Year celebrations. On February 22, the teachers of the Confucius Institute prepared small lanterns, Chinese knots, bookmarks, red envelopes and other New Year gifts with Chinese characteristics. A series of cultural and sports activities have been launched in turn: paper cutting, calligraphy, shuttlecock kicking, Hanfu (Han Chinese Clothing) Cosplay, Tai Chi, Chinese dance performances, and a table tennis match, which attracted a wide participation. Professor Liu Youfa delivered a keynote speech: “The CUCI would provide Chinese language courses for everyone with different language levels. We will continue to provide strong support for the development of various Chinese cultural activities in the Hillfields community. 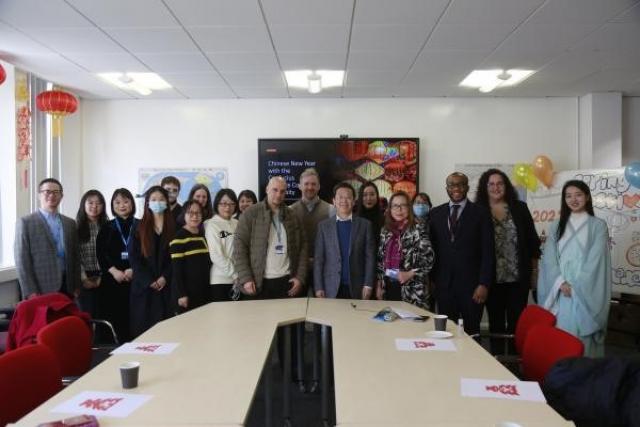 With the approaching of the new year, on the other side of the ocean, thousands of families are reunited, busy putting up Spring Festival couplets, window grilles, door gods, and a hearty New Year's Eve dinner. On the New Year's Eve of January 31, 2022, the celebration of the Year of the Tiger kicked off, which was attended by the teachers and students of the Coventry University, representatives of the World Language Association of Coventry City, visiting scholars of Coventry University, and Chinese students studying at the CU. Although the scale of this celebration has been reduced due to the impact of the pandemic, it is the common wish of every participant to make friends and seek common future development. Ye Lei and Zhao Mengxia, visiting scholars from Hubei University of Science and Technology, said the activities made them feel at home. 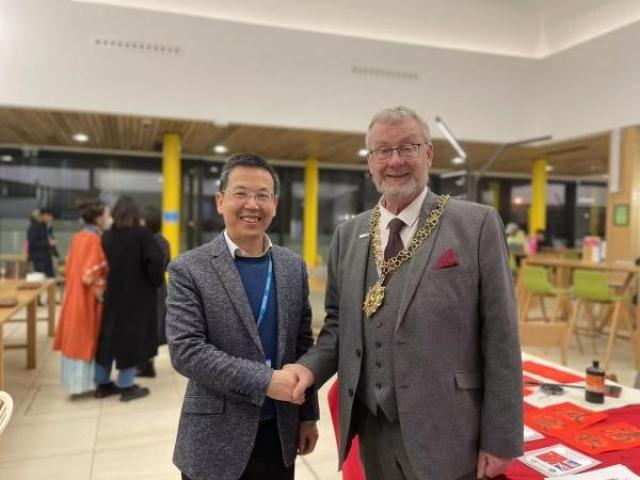 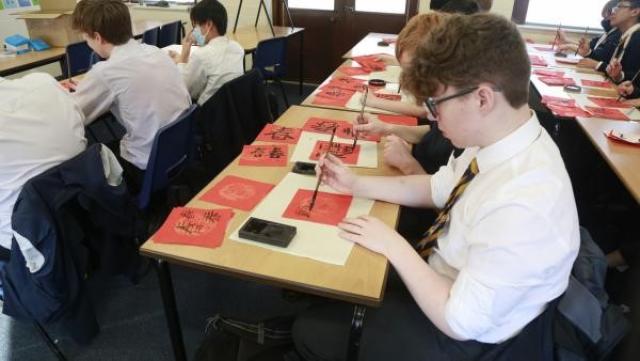 The CUCI has been committed to making China’s voice better heard. On February 2, the CUCI was invited by the Engineering Academy of Aston University in Birmingham to jointly carry out Chinese cultural experience activities to celebrate the New Year, including paper cutting, Chinese dance, Tai Chi, calligraphy and Cultural experience activities such as dumplings making, which piqued students' curiosity about traditional Chinese culture. 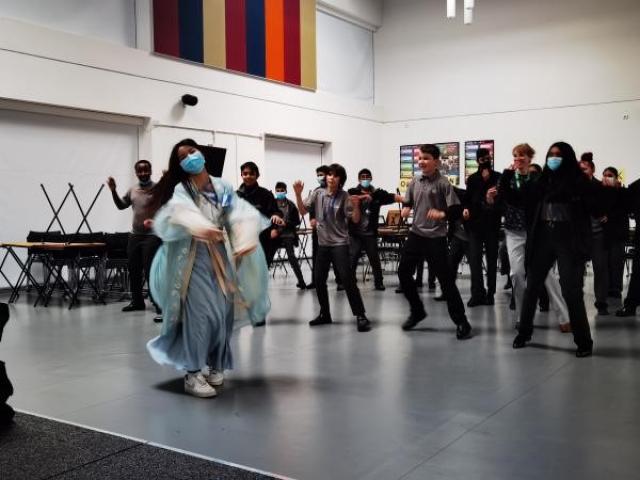 On February 4, the CUCI was invited by the Grammar High School of King Edward VI School in Stratford-upon-Avon, where Shakespeare’s former residence was located, to jointly hold Chinese Day to celebrate the Chinese New Year for students of grades 9 to 12. There are three themed courses of calligraphy, Tai Chi and Chinese dance and they attracted wide attention. 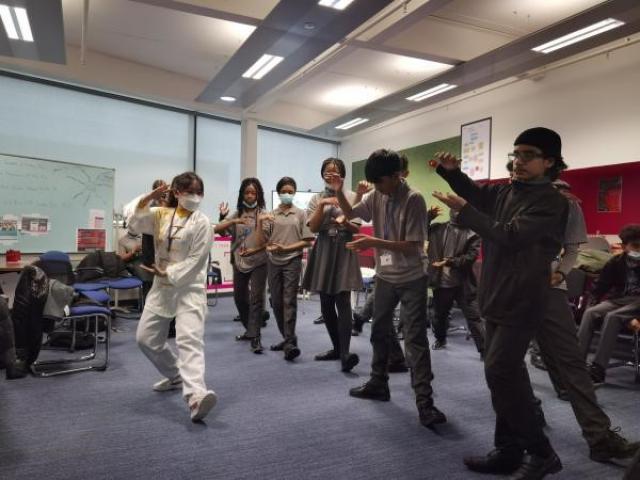 After the Spring Festival activities, Klara, the international program director of Aston University Engineering Academy, and King Edward VI Grammar High School both expressed their high affirmation to the CUCI via emails.

Local primary and secondary schools in the UK have always been important places for the CUCI to carry out Chinese teaching and cultural activities. Liang Feng, who has been in charge of the management of Chinese teaching in primary and secondary schools, believes, “We need to use the Spring Festival celebrations to get out of the classroom and out of the campus, so that more local people of different classes and age groups can experience Chinese culture and fall in love with it and therefore with learning Chinese.”

Whether they were a young volunteer or a teacher who has been stationed for many years, for more than 20 days they zealously promoted a series of cultural activities for the Year of the Tiger. They all deeply feel the heavy responsibility of being a cultural messenger. The Confucius Institute jointly established by JUFE and CU made another rewarding step in promoting cultural exchanges between the two countries.