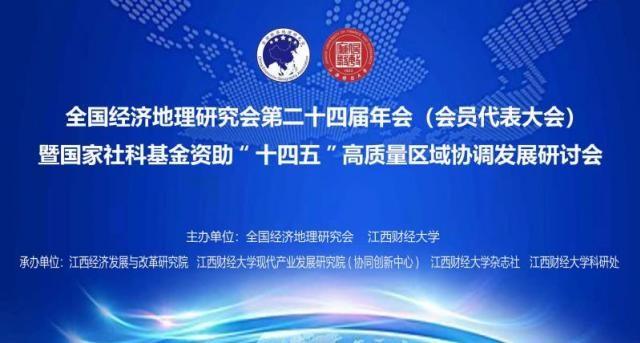 During November 5-7, the 24th Annual Meeting of the National Institute of Economic Geography and the 14th Five-Year High-quality Regional Coordinated Development Seminar hosted by the National Institute of Economic Geography and JUFE was held at JUFE, which was attended by nearly 500 experts and scholars from Renmin University of China, Wuhan University, Nankai University, Chinese Academy of Sciences, Peking University along with other universities and research institutes. The conference was organized by Institute of Jiangxi Economic Development and Reform of JUFE

On the morning of the 6th, Vice President Prof. Yuan Honglin delivered an online speech. He pointed out that based on its own characteristics and advantages, JUFE established the Institute of Jiangxi Economic Development and Reform in an effort to build a first-class think tank and serve the needs of local economic development. The gathering of big names and talents at this meeting will surely promote the construction of first-class discipline programs of applied economics at JUFE to a higher level. The opening ceremony was presided over by Wu Zhijun, Director of the Institute of Jiangxi Economic Development and Reform.

Honorary President of the National Institute of Economic Geography, Professor Sun Jiuwen of the School of Applied Economics of Renmin University of China, and President of the NIEG, Professor Zhang Keyun from the same university respectively made keynote speeches titled Exploration of the Western Development Strategy Based on the Realization of Modernization and Legislation on Regional Management of the Unbalanced and Inadequate Development of China.

On the evening of the 5th, the Ninth Council Meeting of the NIEG was held, during which the new president, vice president, secretary-general, executive directors and directors were elected. Director Wu Zhijun, Deputy Director Xi Mingming, and Researcher Liu Zhen of Institute of Jiangxi Economic Development and Reform and Director Xu Bin of the Collaboration Innovation Center of JUFE were elected as executive directors, and Deputy Director Chen Yanyun and Associate Professor Liu Weiming directors.